The appearance quality of concrete is an intuitive reflection of the quality of concrete. The uniformity and glossiness of the concrete surface are more and more concerned by construction contractors and owners, and the requirements are getting higher and higher, which has gradually become an important economic factor.

Whitening is the most common phenomenon on concrete surfaces. According to incomplete statistics, the phenomenon of whitening in concrete projects is as high as 36%, which is one of the "diseases" that are difficult to deal with in construction projects. Generally, it will not cause quality accidents of building structures. The assessment of quality levels can have serious consequences. 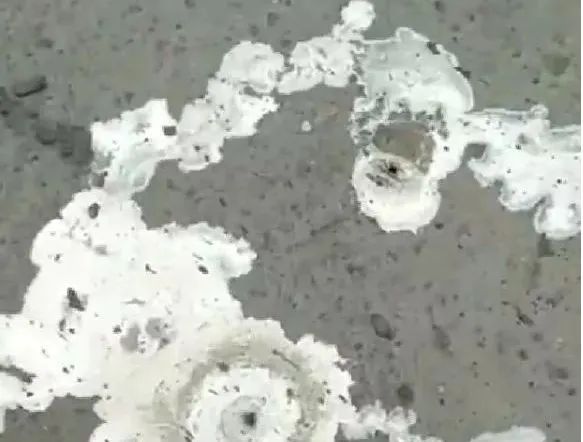 Mechanism of whitening and frosting on concrete surface:

The whitening of the concrete surface, commonly known as efflorescence or blooming, is generally believed to be caused by the hydration of C3S and C2S to form C-S-H gel during the cement hydration process, and a large amount of Ca(OH)2 is formed, while Ca(OH)2 It is an extremely soluble substance, which often exists in the free water of concrete in the early stage of hydration.

In the early stage of concrete setting and hardening, as the concrete dries, the free water with a high concentration of calcium hydroxide inside the structure will gradually migrate outward along the internal capillary pores to compensate for the water evaporated from the surface, and the Ca dissolved in it will be released. After (OH)2 is brought to the concrete surface, Ca(OH)2 will chemically react with CO₂ and moisture in the air to form a water-insoluble white precipitate CaCO₃, which adheres to the concrete surface. This efflorescence produced during hardening is called primary whitening.

During the hardening process of concrete, the hardening speed gradually slows down; under the erosion of rain and snow, water will penetrate into the concrete in some parts, and will dissolve the remaining calcium hydroxide. When it is high and evaporates, the calcium hydroxide dissolved in it will be brought to the surface of the structure again, resulting in secondary whitening.

The second whitening is different from the first whitening. In most cases, it does not appear on the entire surface of the concrete, but is unevenly distributed on the local surface. This whitening is related to cement type, amount, compactness, water absorption and porosity. The rough surface is easy to accumulate water, the interior is loose, and the parts with high water absorption are most likely to have multiple whitening.

Causes and preventive measures of whitening of concrete surface:

01. The mixed concrete is bleeding

The more water seeps out of the surface of the structure during initial setting, the greater the severity of blushing. Mainly in the following aspects:

(3) Related to cement. Affected by the source of raw materials, production control and process conditions, the mineral content of cement produced by different manufacturers is also different. In general, for cement with high C3A content, because of its fast hydration and large adsorption capacity of admixtures, the over-mixing of admixtures is avoided under the same conditions, and it is not easy to cause leakage caused by excessive admixtures. water. For cement with low C3A content, the amount of admixture should be appropriately reduced.

(4) It is related to the mix ratio of concrete and aggregate gradation. Mixtures with too small sand ratio or poor gradation are prone to bleeding.

(5) Under the condition that other conditions remain unchanged, the mixing plant generally hopes to adapt to the change of raw materials through the adjustment of admixtures and meet the pumping requirements of different grades of concrete. Adding an appropriate amount of water-retaining, plastic-retaining and air-entraining components to the admixture is beneficial to improving the workability of concrete and reducing bleeding and settlement.

02. High content of soluble salts and alkalis in building materials

(1) Cement is the main component of concrete. The higher the alkali metal oxide content of the cement itself, the more alkali can be precipitated under certain conditions, and the greater the possibility of whitening the surface of the mixed concrete. The alkali content of cement also has a great influence on the effect of admixtures. Therefore, when selecting cement, low-alkali cement should be used as much as possible.

(3) Naphthalene-based concrete admixtures are currently the most widely used, mostly with low concentrations. The content of Na₂SO₄ is relatively high, which increases the soluble substances in the concrete, thus increasing the possibility of whitening the concrete surface. Minimizing the alkali content of the admixture is not only beneficial to prevent the alkali-aggregate reaction, but also can improve the use effect of the admixture.

(4) When preparing concrete, add some active siliceous admixtures in an appropriate amount. In the process of cement hydration, SiO₂ can react with Ca(OH)2 produced by the hydration of cement mineral components C3S and C2S to form C-S-H gel, which is more likely to react with strong alkali NaOH and KOH in cement to reduce free radicals in concrete. alkali content. In this way, after the concrete is hardened and dried, even if water penetrates into the base material, the amount of salt or alkali available for precipitation is very small. High-quality mineral admixtures have a good effect on preventing whitening of concrete surfaces.

Concrete itself is permeable

Due to the requirements of construction, the water-cement ratio of the concrete mixture is always greater than the theoretical value required for cement hydration. Excessive water often causes bleeding during the concrete pouring and vibrating process, which causes the formation of hydrophobic channels inside the concrete, or stays in the concrete. Inside the concrete, which collects under the coarse aggregate, is evaporated at a later stage of hardening to form internal voids. In addition, after the cement is hydrated, the volume reduction of the hydrate will also cause internal pores or gaps, resulting in a certain permeability of the concrete.

(1) The addition of admixtures can reduce the water-cement ratio, reduce excess water, and greatly improve the compactness of concrete. A certain air-entraining component is mixed into the admixture to improve workability, prevent bleeding and settlement, reduce the large capillary pores on the interface between aggregate and cement stone, and generate a large number of tiny air bubbles distributed in the voids of concrete. It is also collected on the passage of the capillary, and the capillary is cut off, and the impermeability of the concrete is greatly improved.

(2) To strengthen construction management, the concrete should be vibrated and compacted, so that the external moisture is not easy to enter the interior of the component. To strengthen the plastering surface, it is best to plaster the surface again before the initial setting, so that the micro-cracks on the surface due to the evaporation of water are closed, and the cement slurry floating layer is dense, thereby improving the impermeability of the surface layer and preventing whitening.

Concrete should be cured in time after final setting to slow down the drying and evaporation rate. When water penetrates from the concrete surface to the interior, carbon dioxide in the air enters the concrete and chemically reacts with calcium hydroxide dissolved in water to form calcium carbonate precipitation. If it is not maintained in time, when the concrete is hardened and dried, the water will migrate from the inside to the outside, and the soluble substances will be carried to the surface of the concrete.

Before the strength of the pouring structure is completely dry, the curing and covering should not be stopped prematurely. Generally, the insulation and moisturizing maintenance is not less than 14 days after construction. Practice has found that the concrete test block placed outdoors is still shiny on the second day after hardening, and begins to whiten on the third day, but there is no whitening phenomenon if it is maintained in time. Most of the reasons for the serious whitening of the test blocks on the construction site are that they are placed in the open air without necessary maintenance.

In short, there are many factors that cause the whitening of the concrete surface, such as: weather, temperature and humidity, types of additives, etc., and various factors are interrelated and affect each other. Only by taking practical preventive measures in combination with local raw material conditions and actual work conditions can we effectively reduce the whitening of the concrete surface and meet people's high requirements for concrete appearance quality.